Skip to content
Homepage / How To / How to Connect Your Phone to a TV
Your smartphone screen is your window to the worl d and the 21st-century equivalent of what in the olden days would’ve been a battered, leather-bound journal. Pictures, videos, and other documents of our life are contained within that small screen, but there inevitably comes a time in your life when you want to share them on a bigger screen. Thankfully, there are myriad ways to connect your phone to a TV these days, and here we will go through the most popular methods. 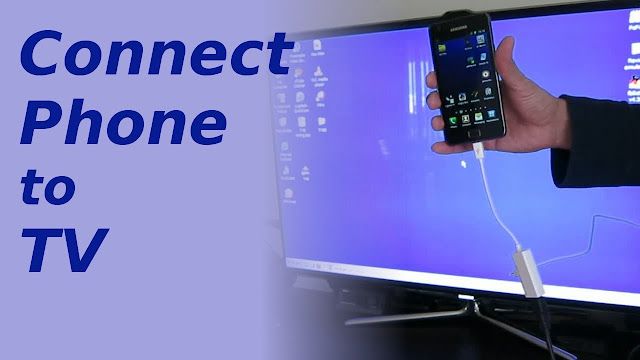 Connect Your Phone to a TV Wirelessly

Screen Mirroring/Stream Local Videos and Photos From a Phone to a TV
If you don’t have a Smart TV, the cheapest, most universal way to beam content stored on your phone to your TV is via a Chromecast which you can pick up from around $30. On your phone you’ll need to get the Google Home app (which is available on Google Play and Apple’s App Store) so you can sync your device up with the Chromecast. Then join the same WiFi network as your Chromecast, and in the Google Home app select “Cast screen/audio” in the menu.

If you do have a Smart TV and if it’s not too ancient, it should have a “Screen Mirroring” feature hiding somewhere. Turn this on,  and make sure your Android device is on the same WiFi network as your TV. Next, you’ll need to find your phone’s version of screen mirroring (On HTC it’s called “HTC Connect,” Samsung devices call it “Smart View” and so on.) and activate that.
To mirror your iPhone screen to a TV, you’ll need to have an AirPlay-compatible TV or device. If you’re happy to splash the cash, you can get an Apple TV, but the cheapest option in this case could be to get an Amazon Fire TV Stick, which is AirPlay-compatible. If you want to get Airplay for free, have the Kodi app and are up for doing a bit of tinkering, then can even enable Airplay on Kodi if you wish.

If you’re looking to beam online music or videos from your phone to your TV, then apps like Spotify and YouTube can sync up with each other between your phone and your TV across your WiFi network. You can get Spotify on your phone easily enough, but unless you have a Smart TV, then you’ll need some form of gadget that contains the Spotify app.

What kind of gadgets are we talking about? Anything from a pricey gaming console like the PS4 or Xbox One to the cheap-as-chips Chromecast has the Spotify and YouTube apps. (On the PS4 the app you want is called “PlayStation Music” which is partnered with Spotify.) Even cheap Blu-ray players these days are “Smart” as well and usually feature the big apps that can sync up with those on your phone.
If your phone is connected to the same WiFi network as your TV or the device attached to it, on Spotify on your phone you should see an option at the bottom of your screen to stream it to the device, while in YouTube on your phone there will be a small TV icon at the top right.

Connect Phone to a TV via HDMI

If you’re not averse to cables and want to save a bit of money, you can get a good old-fashioned cable to hook up your phone to your TV. You’ll need a “micro-USB to HDMI” cable if you’re an Android user, and iPhone users will need to get a “Lightning to HDMI” cable. The official ones are pricey, but you can pick them up on eBay for around $15.
It’s not quite as slick as doing things wirelessly, but at least you know your signal won’t cut out due to router problems!

There really are untold ways to bridge that gap between phone and TV – with prices ranging from virtually free to three-figure sums. While we like to keep things cheap, more pricey devices like the Chromecast Ultra and AppleTV come with plenty of perks like more stable streaming and 4K compatibility. Hopefully you now know all you need to make a wise decision!